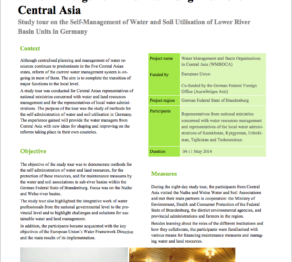 Although centralised planning and management of water resources continues to predominate in the five Central Asian States, reform of the current water management system is on-going in most of them. The aim is to complete the transition of major functions to the local level.
A study tour was conducted for Central Asian representatives of national ministries concerned with water and land resources management and for the representatives of local water administrations. The purpose of the tour was the study of methods for the self-administration of water and soil utilisation in Germany... 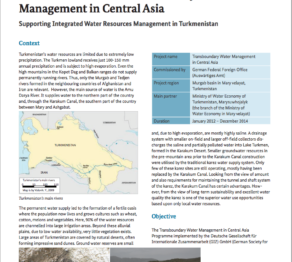 Turkmenistan’s water resources are limited due to extremely low precipitation. The Turkmen lowland receives just 100-150 mm annual precipitation and is subject to high evaporation. Even the high mountains in the Kopet Dag and Balkan ranges do not supply permanently running rivers. Thus, only the Murgab and Tedjen rivers formed in the neighbouring countries of Afghanistan and Iran are relevant. However, the main source of water is the Amu Darya River. It supplies water to the northern part of the country and, through the Karakum Canal, the southern part of the country between Mary and Ashgabat.

The permanent water supply led to the formation... 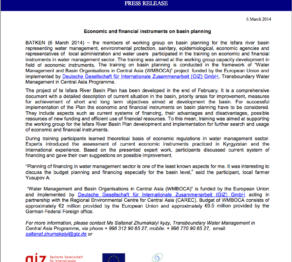 BATKEN (6 March 2014) – the members of working group on basin planning for the Isfara river basin representing water management, environmental protection, sanitary, epidemiological, economic agencies and representatives of local administration and water users participated in the training on economic and financial instruments in water management sector. The training was aimed at the working group capacity development in field of economic instruments. The training on basin planning is conducted in the framework of “Water Management and Basin Organisations in Central Asia (WMBOCA)” project funded by the European Union and implemented by De... 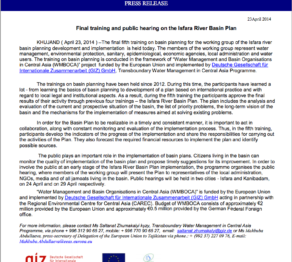 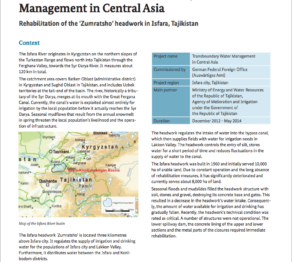 Moreover, WMBOCA activities focus on the introduction of the basin approach, for which the EU Water Framework Directive is the guiding concept... 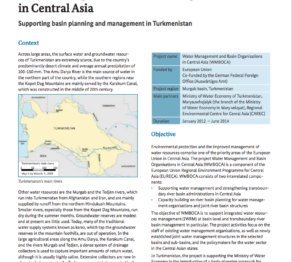 Context
Across large areas, the surface water and groundwater resour-
ces of Turkmenistan are extremely scarce, due to the country’s predominantly desert climate and average annual precipitation of 100-150 mm. The Amu Darya River is the main source of water in the northern part of the country, while the southern regions near the Kopet Dag Mountains are mainly served by the Karakum Canal, which was constructed in the middle of 20th century.

Other water resources are the Murgab and the Tedjen rivers, which run into Turkmenistan from Afghanistan and Iran, and are mainly supplied by runoff from the northern Hindukush Mountains...

ASHGABAT(7-8 February, 2014) – The final training on geographic information systems (GIS) in the
framework of the EU action “Water Management and Basin Organisations in Central Asia (WMBOCA)” was
held by Deutsche Gesellschaft für Internationale Zusammenarbeit (GIZ) GmbH Transboundary Water
Management in Central Asia Programme.
Professionals in spheres of water management from Akhal, Balkan, Dashoguz velayats and GIS specialists of
Water Survey Control under Ministry of Water Economy of Turkmenistan participated in the training.
The training was aimed at introducing the participants to the advantages of GIS tools application in water
resources management. Particularly, the training introduced the special geographic modeling software –
ArcGIS Spatial Analyst that is used mainly for development of general land use and soil salinity potential
geographic information maps.
Moreover, organisers presented the major results and works on the Murgab river basin GIS maps developed
during the series of GIS training sessions for Mary and Ashgabat water specialists in 2012 and 2013.
The training was conducted by highly qualified specialists of the Scientific Information Center of the Interstate
Coordination Water Commission of the Central Asia (SIC ICWC).
In 2012, the Programme handed over the GIS equipement to the partner organisations Marysuwhojalyk and
Water Survey Control under the Ministry of Water Economy of Turkmenistan. The partner organisations use
the equipment for more planned and effective allocation of water resources in the Murgab river basin.