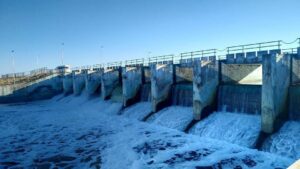 On 17 June 2020, at the Kokaral Dam (the North Aral Sea) in the Aral District of the Kyzylorda Region, an official ceremony was held to start the operation of a fish protection facility (RZU) in the framework of an international project to ensure safety, conservation and development of fish stocks in the Northern Aral Sea Region. The works on the installation of a fish protection facility at the North Aral Sea, which is unique for Kazakhstan and Central Asia started at the end of 2018 after the conclusion of a grant agreement between the GIZ Transboundary Water Management in Central Asia Programme (TWMCA) and the Directorate of the International Fund for Saving the Aral Sea in Kazakhstan.

“The Kokaral Dam in the Kyzylorda Region never had a fish protection structure; as a result, the fish and their juveniles were carried down by the current through the discharge facilities to the watertail. According to the Research and Production Center for Fisheries, the damage to fish stocks from the water discharge without RZU at the Kokaral Dam for adult fish amounted to more than 53 million species or 4 thousand tons, for juvenile fish 30 million species or about 1,000 tons annually. It was decided to install a deep-water hydroacoustic fish protection facility (RZU) at the head race of the Kokaral Dam” – the Research and Production Center for Fisheries informed. 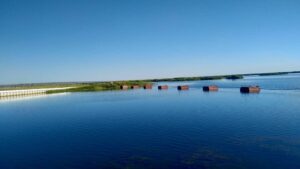 In July 2020, the trilateral Memorandum between the ED IFAS in the Republic of Kazakhstan, GIZ TWMCA and the Akimat of the Kyzyldorda Region was signed, which gave an additional impetus to the successful completion of an important project for the Aral Region.

The main goal of the project was the development and installation of an effective fish protection facility for the water discharge structure of the Kokaral Dam. The total cost of the project is 150,377,000 tenge (about 350,000 euros) including: GIZ financing – 146,877,000 tenge, the contribution of ED IFAS in the Republic of Kazakhstan – 3,500,000 tenge. 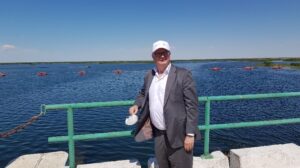 Eventually, on the 17th of June, this project was successfully completed. The opening ceremony was attended by the Ambassador of the Federal Republic of Germany in Kazakhstan, Dr. Tilo Klinner, the akimat leaders of the Kyzylorda Region and the heads of all interested national and regional agencies of Kazakhstan.

Based on the results of the conducted tests of the fish protection facility operation, the director of the Aral branch of the Scientific and Production Center of Fisheries Tynysbek Barakbaev said: “On the first day, as soon as the installation of this structure was completed, the scientists conducted an experiment, when they installed the fishing nets in the RZU area for the night without turning on hydroacoustic device, and as a result, about 100 kilograms of fish with 11 species were caught. And on the second day, the same experiment with the same sequence was carried out with the hydroacoustic device turned on. As a result, 4 species of commercial fishes were caught with a total weight of 12 kilograms. According to the observations made, the analysis of operation of the hydroacoustic apparatus proved to be highly efficient, but this is not the final result, as it is necessary to study all the subtleties of its work and the effect of sounds on fish during all seasons”.

We are sure that the installed fish protection facility will play a big role in saving and increasing fish in the Northern Aral Sea, which will affect the catches of local fishermen and welfare of their families. This example will also serve as a basis for the implementation of similar projects in Kazakhstan and Central Asia.

The links to news sites with the description of the results of the project are given below: 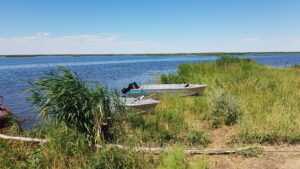 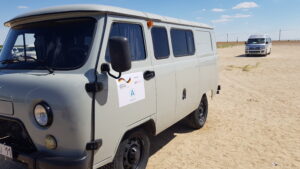